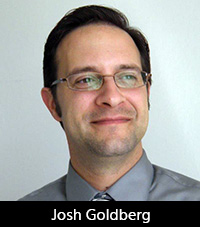 In 2007, the United States passed legislation to phase out the manufacture and trade of incandescent light bulbs, the EU following passed similar legislation in 2009. The rest of the world has been following suit creating a huge opening in the lighting market for a technology to fill the gap. Fluorescent lights have become more compact with less mercury, but they still contain the heavy metal that could become a problem in landfills in large amounts.

Until recently, LED lights were expensive and poorly designed for general lighting usage. The manufacturing price and, consequently, the retail price have come down significantly in recent years, while the energy efficiency and brightness of LED bulbs have gone up. These improvements in the technology have led to some projections of 45% growth every year for the next five years. With the growth in the industry, there has become a higher demand for LED materials and higher expectations for LED material performance.

Solder masks are traditionally green in color, and are expected to withstand the high temperatures present in solder pots, with a need for a different color like blue, red, or black arising every once in a while. The rise in LED production has called for improvements in the color white and the color stability of the mask in general. For the lighting industry, not only are the solder masks expected to perform well, but the formulator needs to have an understanding of properties such as reflectance in relation to color theory and how this will change as various formula adjustments are made for different applications.

What is Reflectance, and Why is it so Important? The property of reflectance is consistently named as one of the most important properties when considering a white solder mask for LED applications, but what exactly is reflectance? First, we must differentiate between reflectance and gloss.

The strict definition of gloss is that it is an optical property which indicates how well a surface reflects light in a specular (mirror-like) feature direction. Since this is a surface property, it is affected by things like the surface topography, the refractive index of the material being measured, and the angle of incidence. The angle of incidence is important for different types of gloss. For instance, it is referred to as “sheen” when the gloss is measured at low angles to the substrate. The “luster” is the perceived brightness of the specular light and the diffuse light relative to the surface. “Specular gloss” is the light reflected at the surface opposite the incoming angle of light.
The strict definition of reflectance is that it’s a measurement of how well a surface reflects radiant energy. The surface is exposed to a light source, and the reflectance is how much and at what wavelength that light is reflected back. You typically see reflectance noted as a graph over the color spectrum with the reflectance number typically noted as the % reflectance at 450 nm.
The graph in Figure 2 for a generic white product would be noted as having between 90–95%  reflectance for the red and green lines with the spectrum reflectance decreasing towards red colors at around 650 nm. 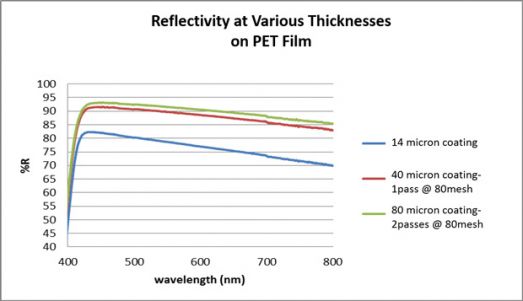 Note: This article originally appeared in the February 2016 issue of The PCB Magazine and this summary is reprinted here by permission from the publisher.