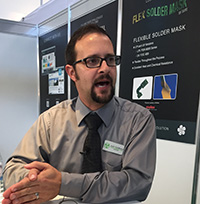 Taiyo America’s Josh Goldberg agreed to spend a few minutes with me at productronica recently, where he indeed climbed out of the box and explored the broader market for high-performance polymer coatings in the electronics industry.

Pete Starkey: It's great to see you here at productronica, Josh. The show looks pretty busy and pretty active; what's your view of the market in general, and how do you see the market trends?

Josh Goldberg: With Taiyo, my specific function is not only looking at the PCB markets, but also looking at new markets. What that includes are areas where traditional soldermask may not have been thought of before, but the properties of it can transition very well into some new markets, specifically things like solar, displays, and lighting, as well as some printed electronics or roll-to-roll type printing for additive manufacturing of electronics. What I've been doing is visiting a lot of OEMs and research institutes, think tanks, as well as customers, and finding out what it is that they would like to see from Taiyo in the future. What types of materials, or material properties do they want to see? I think a good example of that is the LED market, for instance.

With the whole light bulb industry shifting from using tungsten filaments, it's left a large vacuum to fill that space. Some of the technologies positioned for the lighting market are LEDs, fluorescent lighting tubes, and OLEDs—organic LEDs. However, currently, it looks like LEDs are positioned to fill a lot of that space that was left behind by the tungsten type of light bulbs. What we've been doing is focusing specifically with the manufacturers and finding out what's critical to them for a soldermask property. Obviously, reflectivity is one of them, but there are also a number of other properties that they like to hit on as far as what they like to see out of a product from Taiyo. We've then been concentrating our resources into trying to boost Taiyo products to the next level. It is not just about solder mask on PCBs anymore, but more of a high-performance material for some of these new, high-performance types of devices. 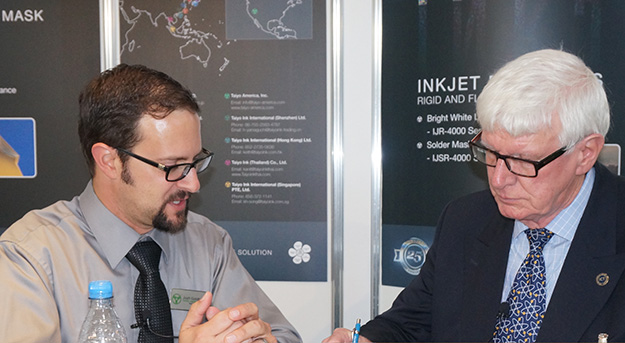 Starkey: I can see the benefit in taking the approach that you're taking. In many cases I think you don't really know what the marketplace wants, and the marketplace doesn't really know what it needs until you get together and talk about it. If you take the initiative, be proactive, and get out there, even if you're talking about things that you can't yet achieve, at least you’ll know where to steer your development programs. Aiming towards things that are going to be market successful and, if necessary, steering away from things that are going to be the right idea in the short term but have no long term future.

Goldberg: Sure, and actually a great example of that would be OLED devices for lighting. In the early years with OLED, a lot of general industry research was put into whether OLEDs could be used for lighting. We originally researched that as well, and it was one of those things where we thought it would probably be more in displays, not necessarily in the lighting sector, but we'll keep an eye on it anyway. Now we're actually seeing that the LEDs are really more taking over for the lighting end of it, whereas with OLEDs you are seeing more for televisions, displays for your screens and things like that. Being able to recognize where these technologies diverge from each other, we were able to develop or recognize what products cater more towards what that end product would eventually be.

Starkey: What nature of product would be appropriate, for example, for an OLED application?

Goldberg: For OLEDs, typically speaking, outside of the material that actually fluoresces or gives off the light, there are a number of other materials. Of course you've got the barrier coats, which you hear a lot about that are very highly specialized. But there are other things, for instance, like on the flexible OLEDs there is a need for edge sealants. These edge sealants also need to have a very high level of water and oxygen resistance. It's not quite as stringent as the material that goes over the top of the OLED, and the reason for that is because when you have an edge sealant you've got a certain amount of space that it has to get through to actually reach the device. It's not quite as stringent as something where you have to have a very thin layer on top.

So we’re able to recognize that our products could fit in that application. Another material type that we identified for OLEDs was flexible dielectric material. Inside these OLED devices you have a number of conductive traces, and they need to be isolated from each other, and our flexible solder mask could be used in such a way. Through our research, we were able to recognize the potential for these products for industries other than the PCB industry, and test them accordingly.

Starkey: Really, we need to see Taiyo in a slightly different perspective. For many years, Taiyo has been identified as a market leader in mainly solder resist technology. I think certainly just from this conversation, people will see Taiyo as a leader in the development of specialty coatings for specialty applications. 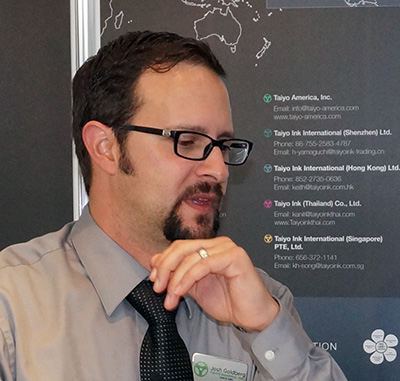 Goldberg: And when you think about soldermask in general, it's a very high-performance polymer material. A lot of these industries don't realize that, because like you said, if you go into the PCB industry or a PCB shop, they look just for the PCB suppliers of the materials. If you go to solar, they look just for the solar suppliers. There aren’t a lot of people looking outside of the box, so to speak. That's really where our materials come in because they're a high-performance polymeric material. It's more of a transition from being just soldermask to being a high-performance material company. That's really where we've been focusing a lot of our energy, too—making people realize that this material works great and you may not have thought of it before.

There's also a lot of development work that goes into not just soldermask, but we’re also branching out and doing development work for new areas. We're looking at application methods, for instance, doing curtain coats, spray coats, screen print and now we’re looking at inkjet as well. We're not just concentrating on the materials, but we’re also trying to get a synergy between the materials and the application methods that are out there.

Starkey: Josh, I quite envy your position, which gives you the opportunity to, as you say, climb out of the box and really look at the broader market from a whole different perspective and guide the developments towards the market. Josh, it's been great to meet you. Thank you for your time.

Goldberg: Thank you very much. I really appreciate it.