The History of Flex PCBs

Phenomena due to electricity have been known for a long time, probably the best known and most spectacular occurrence is lightning in meteorology. The occurrence of the electric shock used by certain fish such as the electric ray or electric eel to catch prey was known in ancient Egypt around 2750 BC. In ancient times, the electrostatic charge of amber was already known to the ancient Greeks, who called it electron. This knowledge is attributed to the natural philosopher Thales of Miletus, who dealt with electrostatic charges around 600 BC.

In the 1st century BC, Parthian clay vessels were used near Baghdad, which were found by Mr. Wilhelm Koenig in 1936 and are also known as Baghdad battery. These vessels contained an iron rod and a copper cylinder sealed with asphalt. Experiments conducted by the Roemer and Pelizaeus Museum in Hildesheim, Germany, showed that a voltage of 0.5 V could be achieved with this arrangement and grape juice as electrolyte. Its use as a kind of battery is controversial.

A targeted and practical application of electricity did not occur until the beginning of the modern era. In 1601, the British William Gilbert systematically investigated the electrical charge on many substances and introduced the term "Electrica.” Around 1663, Mr. Otto von Guericke, the mayor of Magdeburg, Germany, developed a rotatable sulfur sphere which, when rubbed by hand, was supposed to demonstrate cosmic effective forces (virtutes mundane). In 1706, the British Francis Hauksbee developed a friction electrifying machine whose sphere was no longer made of sulfur, but of glass, with the aim of researching electrical effects. In the following decades, these and similar electrifying machines were used primarily for social amusement.

In 1745, the Dutch physicist Mr. Pieter van Musschenbroek - independently of, and one year after, Mr. Ewald Juergen Georg von Kleist - invents the Leiden bottle, also known in Germany as the "Kleist bottle". The Leiden bottle is considered the first capacitor for storing electrical voltages.

In 1733, the British Dufay found that there were two opposite forms of electric charge, which he first called resin and glass electricity. This finding was the basis for the designation as positive and negative electric charge. Around 1752, the American Mr. Benjamin Franklin found connections with atmospheric electricity after the already known frictional electricity. He invented the lightning conductor and interpreted the phenomenon as positive pole and negative pole.

Around 1770, the Italian physician Mr. Luigi Galvani observed twitches of a dead frog using an electrifying machine on frog legs. Thus, it became known that electricity can also trigger movements. "Animal" electricity on frog legs is transferred electrochemical energy and the basis of electrochemistry. From his name Galvani derives the worldwide used term galvanic or galvanization or electroplating.

In 1775, the Italian physicist Mr. Alessandro Volta invented the electrophor, a device for separating charges by means of the influence. Five years later, he developed the Voltaic column, which consists of the metals copper and zinc and an electrolyte. This battery made it possible to generate electricity for the first time without friction, only from stored chemical energy. The Voltaic column became the most important apparatus for direct current generation for many years.

Around 1820, the Dane Hans Christian Oersted observed the deflection of a magnetic needle due to the influence of current. Mr. André-Marie Ampère, a French physicist, then interpreted and described the strength of the magnetic field deflection as a function of the current strength. He invented the "ammeter", the theory of the electric telegraph, first applied by the German physicists Carl Friedrich Gauss and Wilhelm Eduard Weber, and the electromagnet. André-Marie Ampère is the founder of the theory of electromagnetism and the eponym of the physical unit of electric current, the ampere.

The British physicist Michael Faraday is considered one of the founders of electrodynamics. He formulated the law of induction for the first time and dealt with the laws of electrolysis in further works. He thus laid the foundations for the invention of telegraphy. In 1864, the Scottish physicist James Clerk Maxwell conceived the fundamental theory of classical electrodynamics in the form of Maxwell's equations, combining effects of stationary and moving charges and their fields to describe electromagnetic phenomena. From these laws he deduced the existence of electromagnetic waves. He identified light as a manifestation of electromagnetic waves.

In the middle of the 19th century, after the necessary laws were known, a broad application of electricity began. These technical applications are summarized under the term electrical engineering. Examples include the telegraph line in America invented around 1844 by the American Samuel F. B. Morse, the first electric lighting of a public square, the Place de la Concorde in Paris, with arc lighting installed in the same year by the French Louis Joseph Deleuil, and the electric machine developed by the German Werner Siemens in 1866. Later ennobled by the German Emperor as Werner von Siemens.

In the years that followed, electrical engineering became increasingly specialized. While electrical power engineering, which was still closely linked to mechanical engineering, served to supply power to households, businesses and factories, the branch of communications engineering pursued the goal of transmitting information such as messages over long distances with little time delay. Around 1895, the Italian Guglielmo Marconi carried out the first radio experiments in Bologna. He built on the discoveries of the German Heinrich Hertz, the Russian Alexander Stepanovich Popov and the French Édouard Branly. A year later, Popov succeeded in transmitting the words "Heinrich Hertz" by radio during a demonstration before the Russian Physical Society.

About 100 years before the first computers were produced, the Briton Charles Babbage (1792-1871) developed a "Difference-Engine" (difference machine), which was to control existing mathematical tables and develop new ones. He also planned an "Analytical Engine" in 1833. Although the machines never worked properly in practice, his ideas became reality in modern computers. A further step towards machine data processing was the improvement and large-scale application of punch card technology by the American Hermann Hollerith around 1890.

In technical application, the cathode ray tube was developed by the German Ferdinand Braun in 1897, which is the basis of the first television sets. In 1911, the Dutchman Heike Kamerlingh Onnes was the first person to observe the effect of superconductivity. In the middle of the 20th century, the Americans Walter H. Brattain, John Bardeen and William Shockley developed the transistor, which was the basis of the first integrated circuits and computer technology in the following years.

Before the introduction of printed circuit boards, electronic circuits were flexible and freely wired, possibly with the additional use of soldering strips. Mechanical support points were components such as potentiometers, variable capacitors, switches with their solder lugs and the sockets of electron tubes. Depending on the manufacturer, efforts were made to arrange the components clearly at right angles, or the direct, angled connection was always chosen. Since the components such as capacitors or resistors were also very large and long at that time, they could bridge distances of several centimeters.

The carrier materials of flexible circuits in the early 1900s consisted of textiles impregnated with resins and, in the period of the First World War, of so-called hard paper. The driving forces behind this innovation were radios, the first electrical controls and displays on ships, and spherical rangefinders and electromechanical calculating machines for artillery support on British, French, German and American warships. 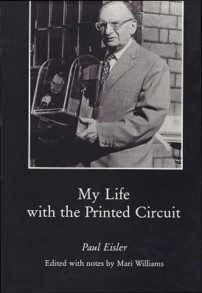 In the early days around 1940, circuits were also produced by screen printing silver conductive lacquer on the base plate. In contrast, conductive tracks and resistors printed and baked onto ceramic substrates are referred to as thick-film technology.

In 1936, the German Konrad Zuse built the first functioning program-controlled computer, the Z1. It does not work with decimal places, but with the dual system, like today's computers. The Z1 was not made of relays, but of thin, bistable metal surfaces. Zuse developed further calculating machines during the Second World War, which could even be controlled with simple programs.

Mr. Alan Mathison Turing was a British logician, mathematician, cryptanalyst, and computer scientist. He is now considered one of the most influential theorists of early computer development and computer science. Turing created a large part of the theoretical foundations for modern information and computer technology. His contributions to theoretical biology also proved to be groundbreaking. The computability model of the Turing machine developed by him forms one of the foundations of theoretical computer science. During World War II, he was instrumental in deciphering German radio messages encrypted with the German Enigma rotor cipher machine. Most of his work remained classified after the end of the war.

During World War II, in 1944, the Mark I was completed by American mathematician and physicist Howard H. Aiken after more than six years of construction and development. It was 15m long and 2m high, had no program control and operated slower than the Z3. Actually a step backwards, the Mark I is nevertheless also an important machine for the further development of computer technology.

The drivers of innovation in printed circuit boards were the technological development regarding electronics during the Second World War and the competition between the political blocs. Radio and radar technology as well as the need for computing power in circuit systems drove development ever faster.

Today, in addition to standard applications, combinations of HDI and flexible printed circuit boards are often offered. The innovation driver here is the advancing miniaturization.

This is perhaps a good example of how good ideas can improve lives.

In a country like Germany with 82 million inhabitants, there are about 130,000 blind people and 17,000 more each year. The mission: To restore sight to blind people and thus increase their quality of life. This requires courageous, motivated people and properly developed expertise to provide an outstanding technical solution.

A microelectronic retinal implant – a chip – can help these people regain sight. One of the central requirements for the material used its, appropriate for medical use. Only biocompatible materials could be used in the manufacture of the entire implant. Absolute precision and reliability are required to meet the exacting standards.